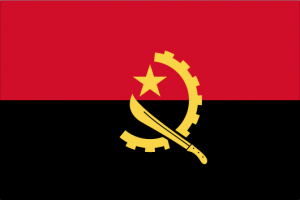 Angola is resource-rich country with high reserves of oil, gas, diamonds and iron-ore, a grid of rivers with great potential for hydro-power, vast stretches of arable land, tropical climate with adequate rainfall, making it home for a much diversified fauna and flora. Situated on the south-western coast of Africa, the country has a land surface of 1 246 700 km2, which includes 1650 km coastline blessed with a rich and diverse marine life in the Atlantic Ocean. The privileged geographical location gives a strategic position as a platform for easy access to the hinterland (land-locked countries) and to the regional markets of Southern and Central Africa right up to the Gulf of Guinea.

After independence, Angola was exposed to almost 30 years of civil war with devastating consequences ranging from the massive destruction of basic infrastructure, problems in supply chain, weakness in social services, traumas suffered by the human capital and the irreparable losses that have touched almost every family. With the peace agreement reached in 2002, the country flipped the page into a new era of national reconstruction, mainly the rehabilitation of key infrastructure and the development of important integrated social programs to overturn the negative impact caused by the armed conflict.

Presently, Angola is one of the fastest growing economies in Africa, with double digits economic growth rates between 2000 and 2010 (the highest rate of 23,2% was reached in 2007). The country is a leading oil producer in Sub-Saharan Africa and is the second largest exporter of crude, right after Nigeria, with production figures of 1.8 million barrels per day.

Despite the current situation caused by the economic and financial crisis affecting international markets, the prospect for growth and development of Angola continues to be encouraging. The economy continues to grow at steady rates of 6.8% (2013), 3.9% (2014), 3.0% (2015e.) and a projected rate of 3.3 % for 2016.

In the past two years Angola saw a slight decline of its international credit rating, given by financial institutions like Moody’s, Standard & Poor and other rating agencies. Today, there are strong signs of recovery of the financial and macroeconomic credibility of Angola in the international market, with the most recent rate of Ba2 assigned by Moody’s in October 2015, to allow the issuing of bond-tittles and treasury obligations.

Besides issuing in the domestic market, Angola is also trading in foreign markets, particularly in some recent operations to purchase Eurobonds, which indicates the confidence of the European market in the country’s financial stability and current recovery to more balanced levels. Angola has an external debt of approximately 27.6% of GDP (2014), which is comfortable position compared to some developing countries.

Another credible sign of recovery is the recent assessment by the inter-governmental body FATF-GAFI – Financial Action Task Force against Money Laundering. The evaluation was made to determine the ability of Angola to comply with the conditions necessary for combating money laundering and terrorist financing, as clarified the Ministry of Finance. This is very good for the financial system, giving Angolan banks greater access to foreign exchange with correspondent banks (cash service), thus facilitating the purchase of foreign currency which is required for international transactions.

Strengths of the Angolan market

·      young workforce, very active and eager to learn (population of approximately 24,3 million people with 50% under 21) and a growing middle class

·      no reference of occurrences of natural disasters such as floods, earthquakes, cyclones or volcanic eruptions which may endanger human lives and resources.

What are the challenges of the Angolan market?

One of the main challenges of the Angolan market is the fact that its economy is highly dependent on revenues from the oil industry; exports of crude oil account for 97.35% of annual export´s revenues which represents nearly 46.8% of the country´s GDP (2014). Therefore, the current drop of global oil prices and the consequent decrease in revenues are causing major challenges to both private and public sector.

The country also faces problems in different areas, due to the poor development of basic infrastructure, constraints on the supply chain, bottlenecks in distribution systems, deficit supplies of water and electricity and poor provision of social services (education, health, public transport, etc.).

The need to diversify the economy

In order to minimize the country’s dependence on oil revenues, the Government launched a vast program of micro and macroeconomic reforms, aiming to create a strong and competitive market economy and promote self-sustainability through the concept of diversification.

The trade policy is aligned with the needs for development and there are different programs conceived to enhance private investment in the primary, secondary and tertiary sectors, giving full support to projects and initiatives that will boost local production and increase the contribution of non-oil sectors to the GDP. This in return will help to gradually decrease the dependence on one export product. The ultimate goal is to increase the supply of products “made in Angola” and shift the source of consumer goods from external markets (imports) to locally produced goods on the domestic market.

In a business perspective, the challenges and weaknesses mentioned above can be converted into opportunities for innovation and diversification; companies can look for new initiatives and whenever possible, redirect part of the resources available into new investment projects in related areas.

Private investors have unrestricted access to all sectors of the economy, including the development of key infrastructure, except in those industries classified as “sensitive”, in the areas of defense and national security, which are of the exclusive responsibility of the State.

The capabilities of the agricultural sector have been proven in the colonial past for crops of sugar, cotton, rubber, coffee, sisal, corn, peanuts, potatoes, cassava, beans, fruit growing and horticulture. Back in early seventies Angola was self-sufficient in all food crops (except wheat). Two-thirds of Angolans depend on agriculture, most at a subsistence level. Maize mill, cassava and sorghum, sweet potatoes, beans, peanuts and millet are the main staples and can be grown in different regions. of rural economy during the civil war (most fields and plantations were damaged or abandoned as populations fled away, irrigation systems destroyed, crops and livestock all scattered around or stolen). With most goods currently being imported, the growth potential of the agricultural sector is enormous.

A unique climate for agriculture and livestock

Angola lies in a sub-tropical zone and yet its climate is relatively cool considering the country’s proximity to the equator. Temperatures are highest in the north, generally decreasing in further south regions. The country has two distinct seasons: warm and rainy season (October to April) and dry and cold (May to September). The climate is favorable to a wide variety of tropical and semi-tropical cultures and extensive grazing areas throughout the southwest plateau and the vast savanna. Almost half of Angola land surface is arable land with very good conditions to grow a wide variety of crops.

Opportunities in Angola’s agriculture sector are plentiful as the government seeks to increase production levels for internal consumption and relaunch Angola’s exports. In fact, the agriculture is seen as a top priority for the Government, as it has huge potential to attract inward investment and generate significant revenues.

To supply the local market and reduce imports, the Government is making huge investments in agriculture and is encouraging private investors to follow the same route, thus improving the livelihoods in rural zones and guaranty safe levels of food security.

Private projects as well as inter-governmental project proposals are welcomed, especially in the following areas:

Opportunities in fisheries and fishing industry

The geography and tropical climate of Angola, its rich fauna and diverse flora are just some of the attractive conditions for tourism and adventure. Beautiful landscape, clean and sandy beaches, clear skies and crystalline waters from rivers, lakes, fresh streams and waterfalls are many of the natural wonders waiting to be explored by the connoisseur. There’s also a cultural diversity from music and dancing rituals to handcrafts and the traditional cuisine of the different ethnic groups.

Opportunities in tourism and hospitality industry

In Angola, the big bulk of tourism revenue comes from business tourism, so the market for accommodation has still room to grow. The country counts only with 183 hotels, making less than 20 000 beds. Therefore, opportunities to invest in tourism and hospitality industry are plenty for both construction and operations of facilities like:

The regional integration of Southern Africa as a single market is well advanced and along with other member-states, Angola is both promoter and beneficiary of SADC strategy to integrate the tourism sector.

The Regional Infrastructure Strategic Development Plan of SADC (RISDP) has proposed the creation of TransFrontier Conservation Areas as means to promote tourism and ensure conservation of biodiversity.

After nearly three decades of civil war, where over 70% of the country’s infrastructure was destroyed, Angola has made enormous progress in rehabilitating its infrastructure networks. Over the past decade, strong government commitment propelled infrastructure development, sustained by revenue streams from mineral exports and a peaceful environment that has attracted significant private investments.

Addressing infrastructure constraints in transport, water and electricity supply, transport networks and social facilities will go a long way. In this front, private investors are invited to support the government’s economic diversification efforts, which should have positive spill-over effects on the wider economy.

Angola’s infrastructure spending has significantly increased over the past few years. However, cuts in 2015 and 2016 budgets led to some scaling back, with certain projects being delayed. As a result, the Government is looking for more inward investment along with Public Private Partnerships (PPP) mechanisms.

Huge investments have been injected into roads and railways. Clean, renewable hydroelectric facilities are gradually extending the power network across the country. Significant investments have also been injected into housing projects in all provinces. This segment will continue to attract investors in mid-term on the sector and related services (maintenance, building management, mortgage loans, etc.).

The main areas for growth and development of infrastructure projects include:

Among other areas, private investors and companies are invited to look for opportunities and seek projects that include: