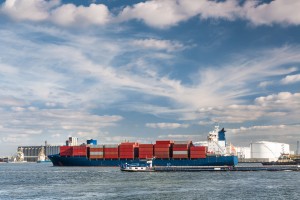 The sea is the future of Earth. Message received loud and clear in Luxembourg.

Getting into the blue economy is an unusual choice for a landlocked country, but it turns out to be a successful diversification policy in this case for Luxembourg. The Luxembourg maritime sector consists of  six poles of economic activities and value creation that are : maritime logistics, service delivery, shipping, maritime safety and security, shipbuilding and research.

Let’s start with maritime logistics that is vital to the Grand Duchy of Luxembourg. While 90% of foreign trade of the European Union and 40% of its internal trade pass through the sea, it is unimaginable that a country remains cut off from the sea, even in the case of landlocked country. Luxembourg has managed to develop efficient infrastructure that relativize its isolation and facilitate the movement of goods from and to the North Sea, the Hanseatic and Mediterranean ports. At the forefront of this infrastructure :  dry container port (Terminal Bettembourg) and the river port (Mertert).

The presence of shipowners and offshore vessels operators in Luxembourg enables the country to access to the various business and financial opportunities offered by the maritime trades. The existence, in the country, of a merchant navy is a second opening-factor. The Luxembourg maritime register, which has just celebrated its twenty-five aniversary, is rich of 225 commercial vessels (February 2016)  for a volume of 2.8 million tons. Ship owners, shipping companies and dredging companies have « anchored » in Luxembourg mainly for two reasons: the existence of a general regime favorable to investors and a maritime administration recognized for its quality and professionalism. A last factor : many offshore extraction platforms are held by Luxembourg companies.

The creation, in 1990, of a maritime register in the Grand Duchy and the immatriculation of many vessels led to the creation of several related economic activities in the local banks, law firms, consulting companies, and insurance companies. This urged the financial sector to develop products and services for the maritime industry professionals. Luxembourg has sheltered investment funds in the blue economy ; it also provides opportunities for Islamic finance. The diversity of  the 56 companies gathered in Luxembourg Maritime Cluster perfectly illustrates the many ramifications of the merchant maritime sector in the more traditional sectors of the Grand Duchy’s economy.

Luxembourg’s expertise in safety and maritime security is less visible, although the country’s participation in anti-piracy operations in the Horn of Africa has not failed to attract the attention of the press . The know-how in this field, controlled by several companies with global reach, ensures maritime surveillance missions, fight against piracy / trafficking and pollution. It also supplies telecommunication solutions for monitoring and contact from the mainland with high-sea vessels. Training is also provided in this area by Luxembourg companies.

The shipbuilding sector is also present in the Grand Duchy. Steel, that is the most important building material for ships, has a long tradition in Luxembourg. The famous Indian company ArcelorMittal organizes the development of its business with shipyards from Luxembourg. The country is also at the forefront of research in new materials and provides equipment to reduce the environmental impact of ships’ navigation (wastewater treatment, flue gas). A famous shipyard is currently implementing its purchasing center in the Grand Duchy and will therefore more easily tap into the local supply.

Luxembourg is now hosting several research centers and companies that are at the forefront of innovation. In recent years, the country has got some solid expertise in marine biology, this development is now a part of the intellectual and scientific influence of Luxembourg and contributes to the success of the research in that field.

The Luxembourg maritime cluster : an association serving this emerging sector

Aware of its importance and its positive impact on Luxembourg’s economy, the Luxembourg maritime sector began to organize from 2008. The non-profit organization Luxembourg Maritime Cluster was born from this consolidation project . With its 56 members representing all maritime professions, the maritime cluster is the voice of what people use to call the « Luxembourg blue economy ». Through its actions and programs, it promotes the sector’s activities, secures its players and helps in strengthening local expertise. Moreover, the Luxembourg Maritime Cluster is curently holding the vice-presidency and the General Secretariat of the European Network of Maritime Clusters (ENMC).

Achievements and Maritime cluster of projects in Cabo Verde

Since 2013 and with the unwavering support of the Embassy of the Grand Duchy of Luxembourg to Cabo Verde, the Luxembourg Maritime Cluster has developed closer ties with the archipelago and specifically its counterpart, the Cluster Do Mar. After fifteen meetings, the idea of further cooperation has emerged, an idea that resulted in March 2015 with the signing of an MOU between the two clusters on the occasion of the state visit of His Royal Highness, the Grand Duke of Luxembourg.

This collaboration culminated with the presence of the Luxembourg Maritime Cluster and seven of its members at EXPOMAR fair in November 2015, alongside the Grand Duchy of Luxembourg Chamber of Commerce and the Commissioner of Maritime Affairs. Early 2016, the Luxembourg Maritime Cluster has received His Excellency Prime Minister José Maria Neves and HE Ms. Leonesa Fortes, Minister of Tourism, Investment and Enterprise Development on the occasion of a seminar on  business opportunities in Cabo Verde. Tese meetings resulted in huge progresses in the management of several projects.

The members of the Luxembourg Maritime Cluster are exploring many possibilities in Cabo Verde. For instance, BIM company is completing the draft of a study on the new international register of ships of Cabo Verde whose goal is to make a quality register and a tool for economic growth. This will lead to job creation that will employ students from the University of Cape Verde’s School of the Sea and  the creation of related economic activities (in ports, but also among service providers, just like in Luxembourg).

A Franco-Belgian-Luxembourg consortium has been selected as part of the international tender for the operation of the sub-concession of the shipyard of Mindelo (CABNAVE). The approach is to change CABNAVE into a true economic platform for the northern islands of the archipelago. Concerning the surveillance of the Exclusive Economic Zone of Cabo Verde, Luxembourg has sent a series of commercial proposals that guarantee a full coverage of the maritime space with the superposition of oceanographic and satellite data, reconnaissance and observation on area through surveillance aircraft or VMS equipment. Water purification, dredging and reconstruction of beaches programs are also studied.

In the past,  relations between the two countries were based on culture and cooperation. However,  they are now enriched with a commercial dimension. The objectives of the Luxembourg Maritime Cluster are to be considered as of long term. The association and its members strongly believe in the huge potential of the archipelago as West African bridgehead (ECOWAS) to the Portuguese-speaking countries. Therefore, a Cape Verdean responsible for communication (Ms Aleida Semedo) was recruited in January 2016 for an initial period of six months to assist the association in developping business relationships on both sides, listen to needs and requirements, provide win – win solutions and look for financing solutions.